Oscar Pistorius will not appeal his 6 years murder sentence - Lawyer 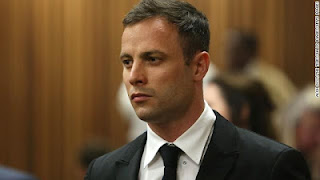 Oscar Pistorius will not appeal his six-year jail sentence for the murder of Reeva Steenkamp, a member of his legal team said outside the High Court in Pretoria on Wednesday.
"We respect the decision of Judge Masipa and are not lodging an application for leave to appeal. Oscar will serve his sentence as handed down," Defense lawyer Andrew Fawcett told reporters.
Pistorius, 29, hugged his family members before being taken out of the court to begin serving his jail term. And could be out in two years for good behaviour.
Earlier on Wednesday‚ Steenkamp's family was seen leaving the court surrounded by family members. Her visibly upset parents Barry and his wife June refused to comment.
"We will not be saying anything for now thank you‚" said a family spokesman