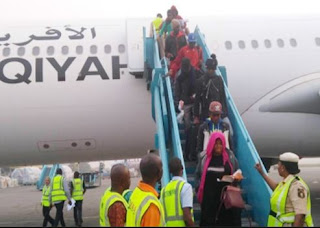 Last night, 141 Nigerians including 11 pregnant women voluntarily returned from Libya to Nigeria with the assistance of the International Organisation for Migration (IOM) and the European Union (EU).

Segun Afolayan, Chief Planning Officer, National Emergency Management Agency (NEMA) confirmed the development to the News Agency of Nigeria saying they arrived at the Cargo Wing of the Murtala Muhammed International Airport Lagos, at about 10.45pm on Tuesday aboard a chartered Al-Buraq aircraft with registration number UZ189.
He said that “after profiling, we have 71 female adults, three female children and three female infants. Also, there were 53 male adults, six male children and five male infants; among them were two medical cases and 11 pregnant women.”

According to him, majority of the returnees are from Tripoli, the capital of Libya which has become volatile in recent times.