I've also been charged before the Code of Conduct tribunal - Tinubu 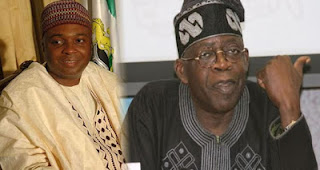 National leader of APC, Bola Tinubu says the current trial of the Senate President, Bukola Saraki at the Code of Conduct is nothing new to him as he was tried at the same tribunal two weeks after leaving office as governor of Lagos state. Speaking to newsmen after his Eid prayers at the Dodan Barracks praying ground yesterday September 24th, Tinubu said

“After they discovered that my asset declaration had some questions, they charged me to the tribunal. I went and challenged them to show proofs. I was later discharged and acquitted because there was no evidence to prove their claim. It is only then I accused the government of being selective. We have to live by example and by our words.
We can’t be talking about it alone. We have to work it without any iota of blackmail. I have been through it. The second week I left office, I was invited by the EFCC. I went there and answer their questions. Later, I took them to court and I won. The government officials are almost no longer believable in this country. When one has a public responsibility, they look at it as if the source of wealth to steal and mismanage public funds and do things that are not included in the democratic norms and values. We cannot overlook a lot of things. We cannot personalise a lot of things as if it is vendetta. We have to endure, be patient, look for justice, equity and balance society.” he said