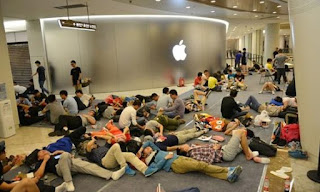 A sperm bank in Shanghai, China is inviting qualified college graduates over 5’5 tall and free of disease to donate sperm in exchange for money to buy an iPhone 6S.
"No need to sell a kidney…Shanghai sperm bank can make your iPhone 6S dream come true," the ad reads."


The sperm bank ad, which is offering to pay $942 for 17 milliliters of semen, has generated massive social media conversation. Sperm banks are hoping the pitch, which comes ahead of the release of the iPhone 6S on 25 September, will help fix a shortage in donors.

The Shanghai Sperm Bank is promising 6,000 yuan for 17 millilitres of semen for those who qualify to donate. Donors needs to be university educated, disease-free and over 5 foot 5.

"This is going to make me really suspicious of anyone with an iPhone 6S" said one user on Weibo, China’s Twitter.

According to a spokesperson with the Shanghai Sperm Bank, the campaign has worked well so far, raising awareness and attracting potential donors, the state news agency Xinhua reported.

A poll conducted on Sina Weibo shows that Chinese social media users are split on the appropriateness of the campaign with close to 20% calling it unseemly and another 27% saying they will donate immediately. "I need the address to Hubei Sperm Bank now please" said one user.