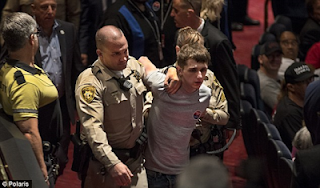 A 20 year old British man, Michael Steven Sandford arrested at a Donald Trump rally in Las Vegas told the Police he tried to grab an officer's gun so he could kill the billionaire Republican presidential candidate.
The anti Trump protester who appeared in court on Monday, said he even went to Battlefield Vegas shooting range on Friday to learn how to shoot. He said he fired 20 rounds from a 9mm Glock pistol to learn how to use it Police detectives who visited the range spoke with an employee who confirmed that he provided Sandford shooting lessons on Friday.
The 20-year-old, who was carrying a UK driver's licence, was arrested at the Treasure Island Hotel and Casino on Saturday after going for a metro police officer's gun. He told a special agent that he was in the U.S. for about a year and a half and lived in Hoboken, New Jersey, then drove to the San Bernardino, California area in his car before coming to Las Vegas on June 16.

Authorities said Sandford went to a Trump rally on Saturday at the Treasure Island Casino and approached a Las Vegas police officer to say he wanted an autograph from Trump. The report says Sandford grabbed the handle of an officer's gun in an attempt to remove it, and was arrested 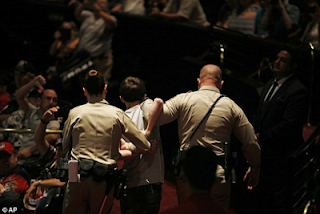 Sandford told officers he had been planning an assassination for about a year and was convinced he would die in the attempt. He said he also reserved a ticket for a Trump rally in Phoenix, scheduled for later in the day, as a backup.

Sandford was charged with an act of violence on restricted grounds.