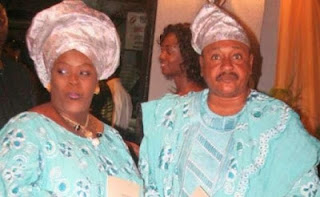 Wife of ace actor, Jide Kosoko, Henrietta, passed away two days ago after a long battle with diabetes. Encomium Weekly paid a condolence visit to the Kosoko's Lagos residence at Bariga yesterday and met the widower looking distraught as he was talking with some colleagues and movie marketers, about his wife's death. Jide Kosoko reportedly said,
"I went to a particular event on Monday (June 6), I was not aware that my wife was dead until the person that was with me asked me to check the rumours flying around the social media about my wife’s death.
I referred to it as rumour because I still didn’t believe, if not until I confirmed it myself. I don’t know how to explain the situation. It is an unimaginable loss. Third wife! Won’t the world count the numbers of lives I have lost?."
Posted by Unknown at 11:25