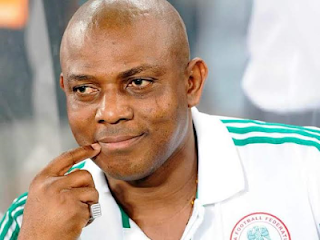 In statement released by his Special Adviser, Media and Publicity, Yusuph Olaniyonu, Senate President Abubakar Bukola Saraki has reacted to the loss of Nigeria's most iconic sports personalities, former Super Eagles captain and coach, Stephen Keshi, who died after a Cardiac arrest in the early hours of today Wednesday June 8th.  The statement reads,
The sad occurrence was both painful and unfortunate coming at a time the nation is in dire need of wisdom and rich experience of sports professionals like the late international star to stabilize its soccer architecture.


Keshi was an excellent star. His soccer artistry and leadership skills remain unparalleled. His days, while donning the national colours and his stint as a National Coach of the Super Eagles could rightly be regarded as "Nigeria's golden moments" in both national, continental and world soccer.
Keshi lost his wife late last year and today we heard the sad news of his demise. This must be a heavy burden for the family to bear. His death at 54 is both a rude shock and highly unfortunate. Nonetheless, we must take solace in the fact that he did his utmost for the development of sports in Nigeria, Africa and the world, during his sojourn on earth.

As a player and coach, he was instrumental to superlative victories for the national team. It could be recalled that the “Big Boss” as he was fondly called, made history by winning the African Nation's Cup as a player in Tunisia 1994 and in South Africa 2013, he won again as a coach. He was perhaps the only Nigerian to have achieved that feat.

He was a great source of inspiration to his contemporaries, team mates and the younger generation who took to football and are still active in sports across the world today. He shall be sorely missed.

The Senate President commiserates with the children and immediate family of the deceased, the Government and people of Delta State, the Minister of Youths and Sports, the nation's football governing body and the Super Eagles over the painful loss.

While praying God to grant the Soul of the departed eternal rest, he urged his children, loved ones and admirers to emulate the enviable lifestyle of industry and patriotism of the late soccer hero.
He also called on both the Federal and Delta State Governments to immortalize him.