I smuggled Cocaine to Fund My Father's Burial 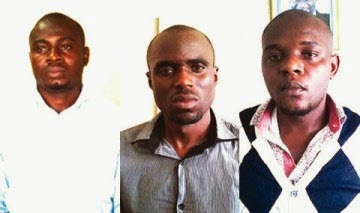 A suspected cocaine dealer, Kingsley Agu, who was recently arrested at the Murtala Muhammed International Airport in Lagos has told operatives of the National Drug Law Enforcement Agency that he took to crime because he needed money to fund his father’s burial.
30-year-old Agu was arrested with two others – Joseph Ezenna and Israel Okoye – for smuggling cocaine valued at N131m from Brazil.
Agu, who seemed remorseful for his act, said told Punch

“I was born in Enugu. I sell clothes at Aba market. I travelled to Brazil in April 2014 because my business was not doing well. The few months I spent in Brazil were even worse than here in Nigeria. While in Brazil, my father died and I had no money for my flight ticket. Bringing cocaine to Nigeria was my last hope of raising some money for my dad’s funeral. I was to be paid N800, 000 for the assignment.”

The drug, which weighed 14.65 kilogrammes, was neatly packed inside laptop bags and female foot wears belonging to the suspects.Our correspondent also learnt that the suspects had expected a combined proceed of N4.1m from their undisclosed sponsors if their mission was accomplished.

One of the suspects, Ezenna, who hails from Anambra State, told investigators that hardship made him to travel abroad. The 28-year-old added that he intended to start a ‘legitimate’ business with a sum of N2.5m his sponsor promised to pay him.

“I am married and my wife is pregnant. I used to run a boutique until I lost everything. Out of frustration, I travelled to Brazil in search of employment. I smuggled the drugs for N2.5m. My intention was to settle down and invest the drug proceeds in any legitimate business,”

In his confession, Anambra-born Okoye, who worked in a bakery in Brazil, said he accepted to traffic the drug to augment his paltry income.

“I am from a poor family. I dropped out of school when I was in primary four due to lack of sponsorship. I worked in a bakery in Brazil. My salary was so meagre that I lived in penury. They promised me N800, 000 to smuggle the cocaine.”