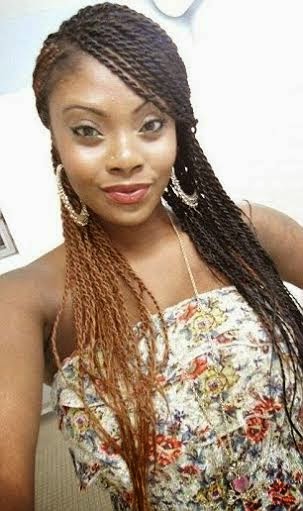 24yr old British-Nigerian lady, Joy Williams (pictured above) has died after a failed £2,000 butt enlargement surgery in Bangkok, Thailand. The young lady's older brother, Anietie, who lives in Nigeria, said the family didn't even know she'd traveled to Thailand.
"We don't really know what went wrong, we only know what is in reports in the media." Anietie said
He also said that the family is making preparations to bring her body home. According to the Daily Mail, Joy, who relocated to the UK from Nigeria in 2007 and lives with her mother in Thamesmead, died on October 23rd after visiting a clinic called SP Clinic in Thailand which she had found on the internet.
She initially visitied to the SP clinic, which she found on the internet, on October 14 to have the operation which she hoped would give her a bigger, fuller bottom.

A few days later her wounds became infected and she returned to have corrective surgery to remove the silicon implants.

But she was found dead on the operating table with a three inch-long stitched incision on her tail bone after medical staff found they were unable to resuscitate her.

Thai officials investigating her death believe her operation had been delayed to ensure Miss Williams had not eaten anything beforehand and that as a result the operation began after the clinic's legal closing time of 7pm.

It is believed Miss Williams had long struggled with her self-esteem and been bullied at school before choosing to undergo an operation on her nose to improve her looks.
While in Bangkok she had been staying at the £11-a-night Vabua Asotel hotel which is used by the clinic as accommodation for its patients.

The doctor who carried out the procedure, Sompob Sansiri, 51, was later arrested and accused of negligence after it was found that he had been carrying out night-time surgery without a licence.

He has now been charged with recklessness causing death and could face 10 years in jail if found guilty.

The clinic has been closed for 60 days while investigations are carried out. Thailand is a world-leader in cosmetic surgery tourism with many companies offering procedures at discounts of up to 60 per cent. The industry earned the country £2.68billion in 2013 alone.

One of Joy's friend who spoke with UK Telegraph said she had suffered bullying and low self esteem issues while they were in school and that she was never happy with herself.

"She was a really, really nice girl. She was very friendly and caring. She was always helping her mum with her brothers. She was a very bright girl and did well at school. She was a bit shy and quiet and I knew in later years there was something wrong and upsetting her. At school she had been bullied over her appearance and she went for surgery on her nose and face. Last time I saw her it was obvious she had had cosmetic surgery. She was fine before, she didn’t need to. She was fine the way she was but she just wasn’t happy. She had no self esteem and I guess she felt she needed to do it. She was just never happy with herself.”

Police are now waiting for the postmortem result which would determine if the doctor will be charged for medical negligence.