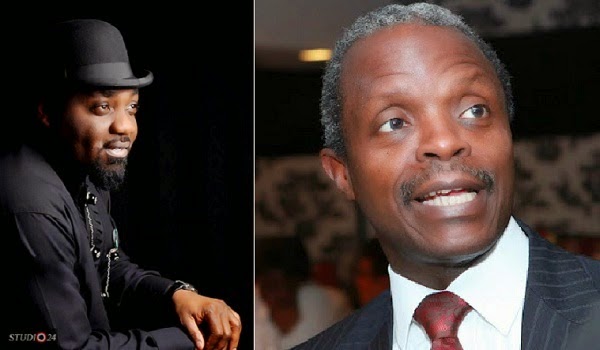 APC's vice presidential candidate, prof Yemi Osibanjo, while addressing journalists said president Jonathan's government is corrupt. In response to him, former musician , Daniel Wilson, is spilling on Osibanjo indicating that he may not be as clean as we all thought. Below is what he wrote on his Facebook page about Osibanjo: 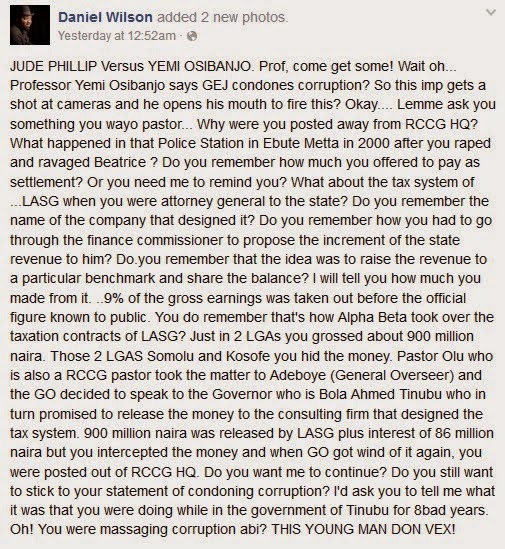 "JUDE PHILLIP Versus YEMI OSIBANJO. Prof, come get some! Wait oh... Professor Yemi Osibanjo says GEJ condones corruption? So this imp gets a shot at cameras and he opens his mouth to fire this? Okay.... Lemme ask you something you wayo pastor... Why were you posted away from RCCG HQ? What happened in that Police Station in Ebute Metta in 2000 after you raped and ravaged Beatrice? Do you remember how much you offered to pay as settlement? Or you need me to remind you?...
What about the tax system of ...LASG when you were attorney general to the state? Do you remember the name of the company that designed it? Do you remember how you had to go through the finance commissioner to propose the increment of the state revenue to him? Do.you remember that the idea was to raise the revenue to a particular benchmark and share the balance? I will tell you how much you made from it. ..9% of the gross earnings was taken out before the official figure known to public.
You do remember that's how Alpha Beta took over the taxation contracts of LASG? Just in 2 LGAs you grossed about 900 million naira. Those 2 LGAS Somolu and Kosofe you hid the money. Pastor Olu who is also a RCCG pastor took the matter to Adeboye (General Overseer) and the GO decided to speak to the Governor who is Bola Ahmed Tinubu who in turn promised to release the money to the consulting firm that designed the tax system. 900 million naira was released by LASG plus interest of 86 million naira but you intercepted the money and when GO got wind of it again, you were posted out of RCCG HQ. Do you want me to continue? Do you still want to stick to your statement of condoning corruption? I'd ask you to tell me what it was that you were doing while in the government of Tinubu for 8bad years. Oh! You were massaging corruption abi? THIS YOUNG MAN DON VEX!