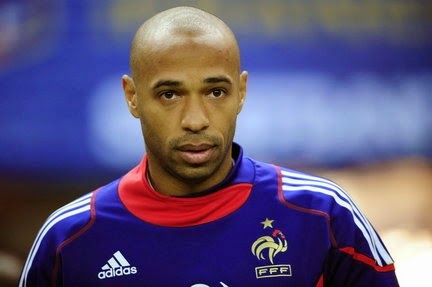 French soccer star Thierry Henry has announced his retirement from professional football after 20 years of playing for top clubs like Barcelona, Arsenal & France. He announced this on his Facebook page and said he will be returning to London to join Sky Sports as a football expert and ambassador.
“After 20 years in the game I have decided to retire from professional football. It has been an incredible journey and I would like to thank all the fans, team mates and individuals involved with AS Monaco, Juventus, Arsenal FC, FC Barcelona, the New York Red Bulls and of course the French national team that have made my time in the game so special. It is now time for a different career path and I am pleased to say that I will be returning to London and joining Sky Sports. I will hopefully share some of the insights, observations and experiences I have learnt over the years with you guys. I have had some amazing memories (mostly good!) and a wonderful experience. I hope you have enjoyed watching as much as I have enjoyed taking part.”


Henry remains France’s all-time top scorer with 51 goals from 123 appearances. During his time at Arsenal, he became one of the most feared strikers in the world, leading the team to two Premier League titles and three FA Cups. The multi-award winning Henry joined Barcelona and over four seasons there, he won two La Liga titles, a Copa Del Rey, the UEFA Champions League, UEFA Super Cup and FIFA World Club Cup.