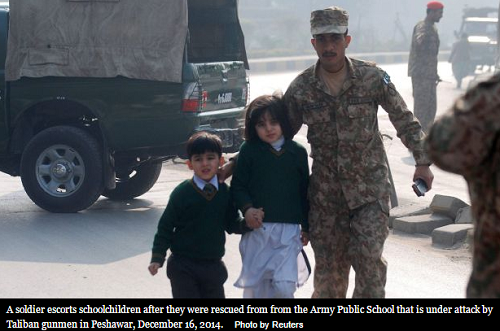 Twenty students and one soldier this morning were killed in a Taliban attack on a military school in northwest Pakistan. The attack started early hours of this morning when Taliban gunmen stormed the military school and started shooting at random, killing over 80 people and a soldier before army commandos arrived the scene to battle them.
Out of the students who were killed are said to be children, while their teachers were not spared either.
Just minutes after the operation, the Tehreek-e-Taliban Pakistan (TTP) claimed responsibility for the attack, saying it was retaliation for the army's continuing operation against militants in the North Waziristan tribal area close to Peshawar.