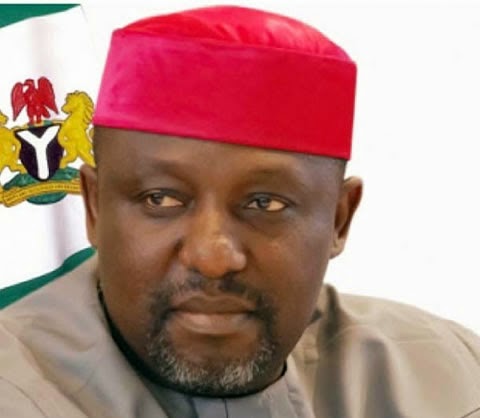 The Imo State Governor, Rochas Okorocha, has picked the governorship ticket of the All Progressives Congress (APC) in absentia as he was still in Lagos for the party’s National Convention which ended on Thursday evening.Okorocha’s emergence as the party’s governorship flag bearer in the state came barely few hours after coming fourth in the just concluded APC presidential primary elections at the Teslim Balogun
Stadium in Lagos.During the Owerri event, which took place at the Imo International Conference Centre, the Commissioner for Lands and Urban Planning,Uche Nwosu, who was secretly adopted as the APC governorship candidate by the party’s delegates, announced his withdrawal from the race.


Speaking before the ratification of the Governor’s candidature, the Chairman of the Electoral Committee, Mr. John Alamba, said that the party had the power to substitute any candidate that withdraws from the race.Nwosu, in his brief speech said that his withdrawal from the race,was based on personal and family reasons, adding that the interest of the party supersedes his personal ambition.He enjoined the party members to give same support and solidarity to the new candidate, Governor Okorocha.Apart from the delegates, also present at the event were all the state executive of the Imo State All Progressives Congress, except the Chairman who was still in Lagos, members of the Okorocha’s cabinet and other state appointees.