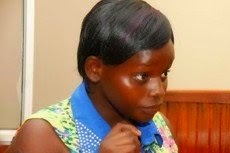 The Ugandan maid who was secretly filmed beating, kicking and stamping on an 18 months old baby has been sentenced to 4 years in prison for assault on a child.
22 year old Jolly Tumuhiirwe was sentenced this morning December 14th in a Kampala high court after pleading guilty to the crime of assault last week.
The court dropped charges of torture which would have given her at least 10 years in prison.