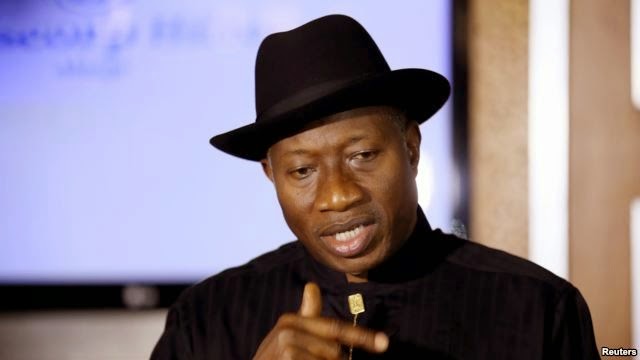 Nigeria’s President Goodluck Jonathan has promised that his administration will win the war on terror despite what he describes as efforts by some individuals to sabotage efforts to combat Islamist militant group Boko Haram. Jonathan was recently confirmed as the presidential candidate for his People’s Democratic Party (PDP) ahead of the February general election.
Critics say he doesn’t deserve a second term in office because he has not ended the violence perpetrated by Boko Haram militants.
Presidential spokesman Reuben Abati dismissed that criticism as politically motivated.


Politics
He said opponents of the president are taking undue advantage of the country’s security challenges to score cheap political points ahead of next year’s vote.
“What President Jonathan has always said is that the will of the people and of the Nigerian government is stronger than that of the terrorists and insurgents. And no matter what it takes, no matter how long it takes the government is determined to win the war against terror,” said Abati.

“Because we are in a political season, quite a number of persons try to play politics with terrorism and insurgency,” said Abati. “The president has called on all professional politicians that this challenge requires the cooperation of all Nigerians, it requires a bi-partisan approach because terrorism poses a threat to our sovereignty as a country.”


Criticism
Opponents say Jonathan has failed to protect citizens from Boko Haram. They also accused him of incompetence and failure to keep his promise to transform the economy and improve the living conditions of the people.
But Abati disagrees, saying the accusations are mere political rhetoric. President Jonathan, Abati says vowed to campaign on his record, based on verifiable achievement in his re-election bid.


Abati added that the Jonathan administration has confidence that the Independent National Electoral Commission (INEC) will organize free, fair, transparent and credible elections.