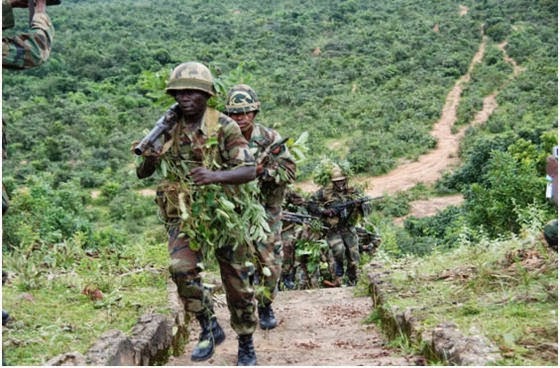 The Nigerian Army has sentenced three officers and 13 other soldiers to two years’ imprisonment each over the April 14, 2014 abduction of over 200 schoolchildren from their hostel in Chibok, Borno State, by Boko Haram insurgents.The soldiers, including a Lieutenant Colonel, a Captain and a Second lieutenant, were arraigned before a General Military Court Martial at the Maxwell Khobe Military Cantonment, Rukuba in Jos, Plateau State, in October 2014.

, “We are not satisfied with the judgment of the court. We intend to file an appeal against this verdict before the confirming authorities…”

A source at the court said that Ojo was convicted on two counts of failing to reinforce Chibok when it came under Boko Haram attack on April 14 and for allegedly releasing information without verification to the Army authorities.

He said the “unverified information” caused the Defence Headquarters to issue a ‘false’ statement on the release of the abducted girls.

The source added that Ojo, who was said to have resumed duty the day before the attack, had responded to the charge of failing to reinforce Chibok by explaining that he got the information on the Chibok attack at his location in Biu by 1a.m.
The Lt. Col. was also said to have explained that he had other operational issues such as his inability to notify the nearby military formation in Damboa.


On the charge that he gave unverified information to the Army authorities, the officer said he never gave any figure on the “rescued or abducted girls.”

It was gathered that the lawyers to Godknows told the court martial that their client, who was charged with cowardly behaviour, was at the Chibok location with 13 soldiers armed with AK 47 but with limited rounds of ammunition to confront over 200 heavily armed Boko Haram fighters.


Another source said that Godknows left four men to defend the camp while he took nine others to confront the insurgents before pulling back due to their high number and overwhelming fire power.